I'm an ordinary member of the German non-profit organization OOoDeV that cares about free software; in our case this is LibreOffice. At the end of the year, they send some small presents to its members ... so a small package arrived at home.

What a surprise! A LibreOffice bag, a LibreOffice lanyard, and a nice Christmas card ... thanks to the creators for both the idea and the great items!!! Next stop: FOSDEM ;-) 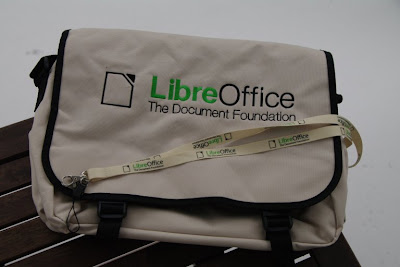 Now, I'll pack another (bigger) bag - we will have some short vacation and I'll be back soon. Thus, please enjoy the first days within the new year ...

also from my side Merry Christmas and a happy holiday season. I hope you will have some time to take a deep breath, enjoy the time with your family and your close friends.

And - very important to me - my deepest thanks to all people who directly and indirectly supported us to turn LibreOffice into reality. Starting from the developers turning ideas into code, to the people who helped me to "survive" this year by easing my day life :-)

Well, and you may notice that I've disrespected the branding guidelines to make up a small present for you ... ;-) 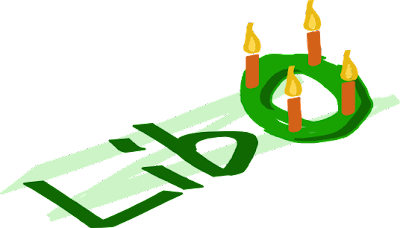 Some special regards to the OpenOffice.org User Experience team located at Oracle in Hamburg - during the last years, I've usually spend a day or two in January to visit them. This year, I miss the time ... and thus a great opportunity to see them :-(

In the last four days, I felt like playing in a bad movie. Coming back from a business trip, I was a bit exhausted. Then, several things broke - and the repairs will require quite some investments. Since today, our flat looks like being "ruined" - the guys and the stuff who work on our kitchen occupy the whole flat, although the kitchen is just a small room. Kitchen parts, no space left ... and dust everywhere. Home sweet home.

In one of my last posts, I've stated that our laser printer said (more or less) goodbye. So we ordered a new one ... easy if you "just" need some grayscale output. But, scanning documents gets more and more important to me. At work, we do have several of these scanners that are able to convert a pile of paper into a PDF. Can a person, who loves the idea of a Document Foundation, resist to buy something like that? Unfortunately (see above), not. :-)

There has been a great offer for such a device (a model my favorite printer maker) ... to make it short: It's now possible to insert a stack of paper, press two buttons, automatically process the documents via the duplex document feeder, and finally send it to a pre-defined group of people. For example, my father will get a copy of the scan via email, and the scanner will save the same document in a folder on my notebook computer (via SMB). And it's really fast - featuring a 667 MHz PowerPC processor. Waaaah!

Finally, the printer works like a charm with Linux ... Postscript compatible, PCL emulation, network administration. To me, it is just astonishing how affordable such devices became. (Especially there are no hidden costs for toner or other supply material). And if I now could understand how to use these certificates and all the security stuff ...

Mmh, it seems I sound like a small boy having a new toy. Maybe I really feel a bit like that ... :-)

However, I've spend some hours to continue the work on the LibreOffice icons. Initially, Bernhard requested some guidance within a steering Committee phone call to know whether an own set can be included. He provided an initial version of the icons which can now be refined. Based on his work, and some initial feedback by Jaron, I started to rebuild the 16px versions without affecting too much of the style (I hope). Here is the current (not yet complete) set:

Interviews, and ... Lost in Translation

Great! I just stumbled across the two first interviews that have been conducted with LibreOffice developers. And although I may claim that I've invested quite some time into this project (and it's predecessors), I don't know that much about it's hackers ... and especially the new guys. So please enjoy reading the interviews with Norbert Thiébaud and Joseph Powers. I certainly did :-)

I also enjoyed the interviews done in other projects ... and some days ago, I wanted to share one of the German interviews done with Jacqueline Rahemipour with the rest of the LibreOffice community. But, I got "Lost in Translation".

Here is a part of the German interview published on ubuntuusers.de:

Okay, well, if you prefer other languages, then let's simply state that the original text states "Interview mit Jacqueline Rahemipour". And what happens if you run the Google Translation? Let's see ...

Mmh, now we got the translation including "My name is Joost Andrae". Although Joost is a great guy working for Oracle, what happened here? It seems, that Jacqueline and Joost have run too many QA sessions together :-)

Printers. And if you really need them ...

Interesting how - at the moment - I really depend on the non-digital physical paper stuff. Yesterday evening, I had to print several copies of a both very important and urgent document - in sum, several hundred pages. After some of them: "Toner empty"

Haha, I'm prepared for that! So I did all the exchanging and cleaning stuff to end up with a printer that now spends the new toner to add "visual artistry" like clouds, stripes, ... everything you really don't need if you want to get perfect printouts :-)

So, I spend the whole evening until 2:30 am, and re-started this morning without that much improvement until now ... It seems that LibreOffice work has to wait until this printer finally managed that print job. Once it works, it runs very well ...